Thanks for contributing to JupyterLite!

We follow Project Jupyter’s Code of Conduct for a friendly and welcoming collaborative environment.

if you don’t have git yet, you might be able to use the instructions below to get it

A recommended approach for any platform is to install Mambaforge and use the Binder environment description checked into the repo.

To get full archive reproducibility test output, only available on Linux, also run:

For speed in GitHub Actions, python and nodejs are installed directly. Provided you already have these, to install the full development stack:

doit handles the full software lifecycle, spanning JavaScript to documentation building and link checking. It understands the dependencies between different nested tasks, usually as files that change on disk.

To see all of the tasks available, use the list action:

To get information about a specific task, use the info info action with the task name from the first column of list:

The default doit action is run which… runs the named tasks.

The default tasks are lint, build and docs:app:build, so the following are equivalent:

For reference the default doit tasks are defined in the DOIT_CONFIG variable in the dodo.py file.

A number of development servers can be started for interactive local development and documentation authoring.

While most of the scripts below will be run (in the correct order based on changes) by doit, the following scripts (defined in package.json) are worth highlighting.

Most of the development tasks can be run with one command:

These are not real server solutions, but they will serve all of the assets types (including .wasm) correctly for JupyterLite development, testing, and demo purposes.

jupyterlite uses the Galata framework for end to end and visual regression testing. Galata is build on top of Playwright provides a high level API to programmatically interact with the JupyterLab UI, and tools for taking screenshots and generating test reports.

Then run the test script:

You can pass additional arguments to playwright by appending parameters to the command. For example to run the test in headed mode, yarn test --headed.

To update the snapshots:

The generated snapshots can be found on the Summary page of the CI check: 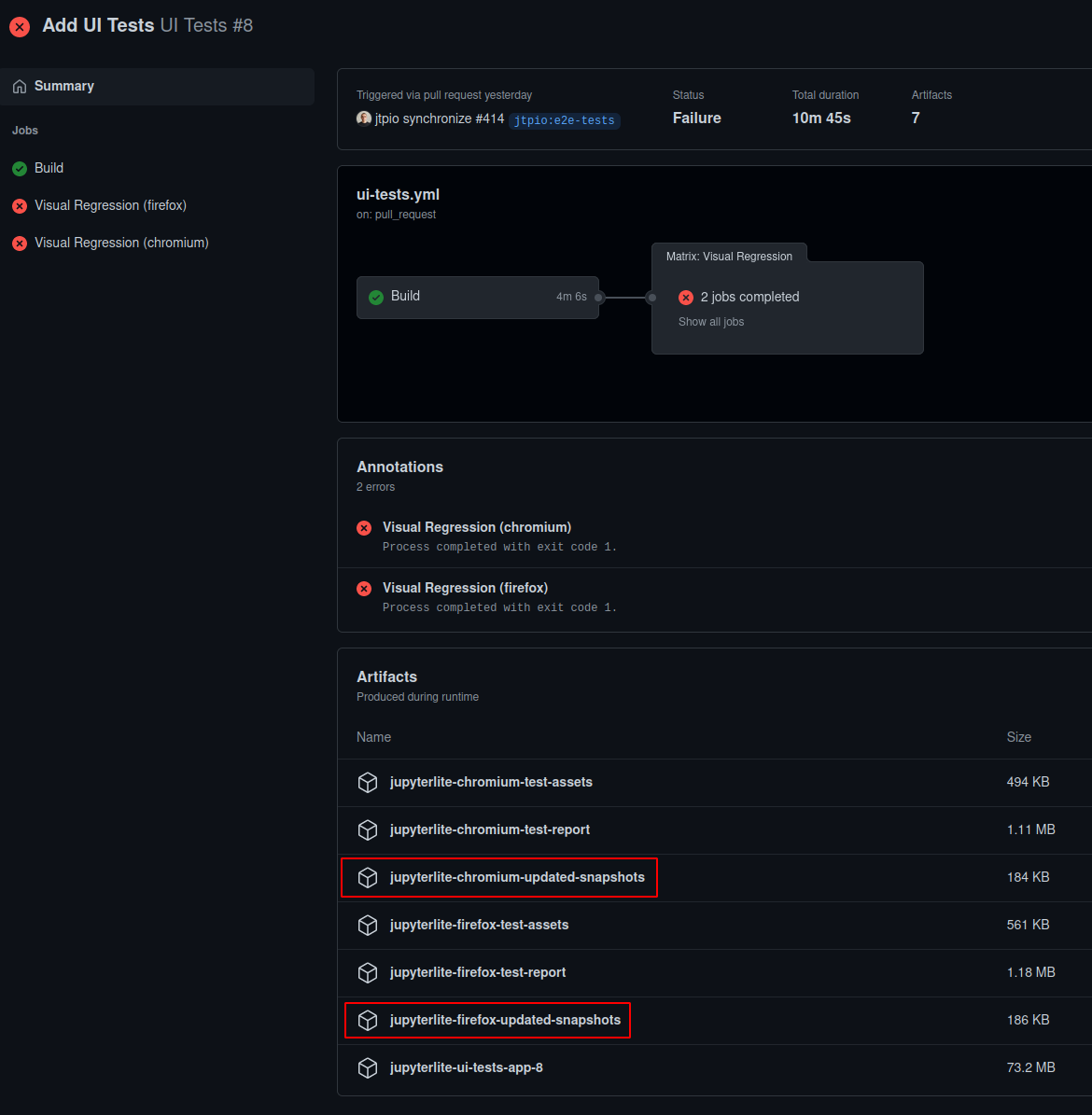 TBD: describe how the @jupyterlite/labextension works with e.g. real serverextensions

After all the yarn-related work has finished, the terminal-compatible python uses the npm-compatible tarball of app to build new sites combined with original user content.

Extra PYTEST_ARGS can be passed as a (gross) JSON string:

Several tasks invoke the jupyter lite CLI, which is further described in the main docs site.

The documentation site, served on jupyterlite.rtfd.io, uses information from different parts of the software lifecycle (e.g. contains an archive of the built app directory), so using the doit tools are recommended.

Additionally, some of the documentation is written in executable .ipynb which are converted by myst: use of doit serve:lab is encouraged for editing these.

Extra sphinx-build arguments are set by the SPHINX_ARGS environment variable. For example to fail on all warnings (the configuration for the ReadTheDocs build):

This also respects the SPHINX_ARGS variable. If working on the theme layer, SPHINX_ARGS='["-a", "-j8"]' is recommended, as by default static assets are not included in the calculation of what needs to be updated.

JupyterLite features and bug fixes start as issues on GitHub.

Pull requests are a great place to discuss work-in-progress, but it is highly recommended to create an issue before starting work so the community can weigh in on choices.

Each pull request is built and deployed on ReadTheDocs. You can view the live preview site by clicking on the ReadTheDocs check:

Additionally, several build artifacts are available from the each run on the Actions page, including: