Deploying on Vercel and Netlify#

They make it easy and convenient to host static websites from existing git repositories, and make them widely available via their CDN.

To deploy your own JupyterLite on Netlify, you can start from the JupyterLite Demo by generating a new repository from the template.

Then add a runtime.txt file with 3.7 as the content to specify Python 3.7 as dependency.

Just like Netlify, Vercel can connect to an existing git repository and seamlessly deploy static files on push and PR events (previews).

Here the configuration is very similar to Netlify. You can specify the same jupyter lite build --output-dir dist build command and configure dist as the published directory.

The build environments of hosted platforms like Netlify and Vercel generally allow for limited control on the Python version installed on the build machine.

This was the case for a while when their build image only included Python 3.6 while JupyterLite requires Python 3.7+. This can be limiting in some cases, especially when you want to have more control on the build.

Fortunately it is possible to run arbitrary bash scripts, which provides a convenient escape hatch.

Specify the Python packages in a requirements-deploy.txt file with additional dependencies if needed:

Then create a new deploy.sh file with the following content:

Micromamba creates a new self-contained environment, which makes it very convenient to install any required package without being limited by the build image.

Then configure the build command and output directory, for example on Vercel: 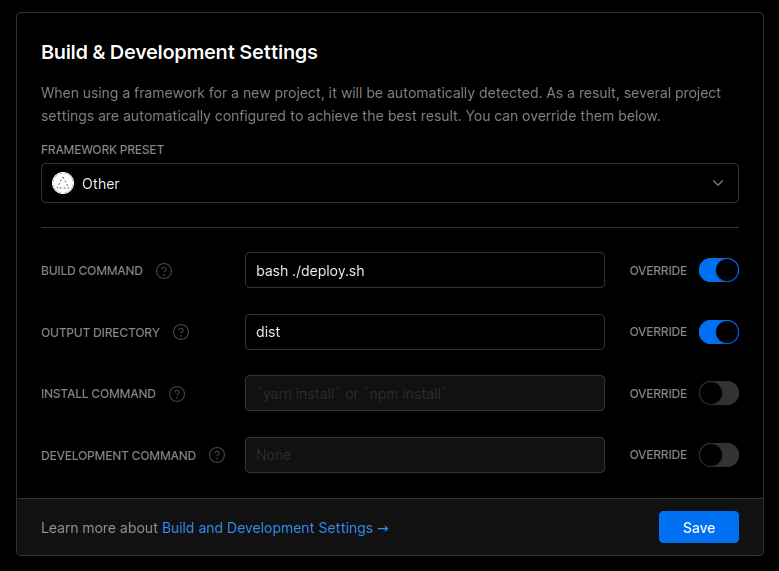